Hey neighbors!  It’s Friday, and I’m excited about the weekend, so I thought I would share a few tips on working with adhesives.  Here’s a few things you might or might not know about working with some of our faves.

Tape Runners:
Tape runners are the scrapbookers go-to adhesive, but one common problem is the amount of adhesive that gets wasted because the tape runner didn’t stick to the paper or it gummed up inside the runner.  These are both caused by the same problem – inconsistent pressure on the runner.  Start out by pressing firmly onto the paper, and drag the runner slowly but firmly.  Make sure you keep the runner completely level with equal pressure and not lean to one side or the other with it.  When you are ready to end the line of adhesive, press firmly and rock the runner back towards the adhesive you just laid.  This will break contact with the surface and end the tape neatly.

3-In-1 Glue and Zip Dry:
These are actually two different products, both made by Beacon Adhesives, but I use them for pretty much the same purpose – adhering paper to chipboard and painted or coated surfaces (such as in an art journal).  The thing to remember about liquid glues like these is that a little goes a long way.  You don’t want to saturate the paper, and you don’t want it to seep out the sides.  What I generally do is run a thin line around the edge of the paper and then zigzag a few lines to fill in the middle.  After adhering the paper, use a brayer and some light pressure over the top to help spread the glue underneath and seal the paper to the surface.  The great thing about these liquid glues is that they dry very quickly, and they are very easy to clean up. 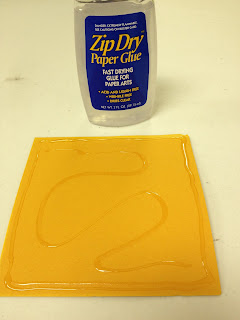 Diamond Glaze (aka Crystal Lacquer, Glossy Accents)
Liquid dimensional adhesive is a multi-purpose glue that can double as both an adhesive and an embellishment.  When used as an adhesive, it is often a favorite because it dries clearly and it will adhere to some non-porous surfaces.  As an embellishment, it is great for adding a lacquered effect to the top of stickers and other items as well as substituting as a resin for filling in bottle caps.  Two of the biggest complaints I hear about clear, liquid adhesives is that they dry up in the tip and sometimes there are bubbles in the glue.

To keep the bubbles at bay, make sure you do not shake your glue.  Also, keep in mind that each time glue comes out, air must go in.  Whenever you tip the glue back to the upright position, the air in the bottle tries to rise to the top, so the less you tip the bottle up and back down again, the fewer bubbles you will have.  I try to keep the bottle in the downward position as much as possible, and I also start my glue flow on a scratch piece of paper just in case there are bubbles already in the nozzle.  If, after all that, you still have bubbles, you can use a sewing needle or paper piercer to pop the bubbles.  Do not try to scrape them off or scoot them to the edge as this actually makes the glue look worse when it dries. 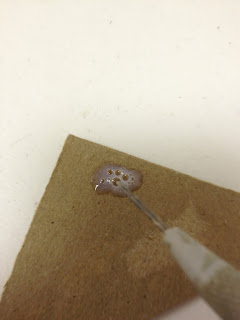 To combat dried glue in the nozzle, make sure you snip the smallest possible amount off the tip when you first open it.  This will allow less air into the bottle when it’s not in use.  Make sure to always screw the lid down tight, and if you can still close the lid with it, you can insert a sewing pin down into the nozzle to plug the hole.  If the nozzle does get stuck, simply use a paper piercer or sewing needle to poke down through the opening.

Liquid glue in a pen:
Glue in a pen is great for gluing small objects or for adding fine lines of glitter.  There’s two things you should remember about working with the kind of glue that comes in a ballpoint pen.  First, the ball works by pressure, so you can’t just start writing with it immediately, you have to put pressure on the ball to get the glue flowing around it.  The best way to do this is to start on a scrap piece of paper and with the pen completely verticle, press down firmly until the glue begins to flow.  Once you’ve established a flow, you can write normally with it.  The second is that this kind of glue is generally permanent when you stick it while wet, but if you allow it to try to a tacky state, it becomes a temporary adhesive.  So if you want it to stick permanently, do it before the glue starts to dry.

Mod Podge:
Mod Podge is a brand of glue designed for découpaging.  It is designed to be used in layers both over and under pieces of paper.  When working with Mod Podge, be careful not to touch the glued areas, as oils from your skin will contaminate the glue.  The glue dries clear, but try to work in thin coats because a heavy build-up area may never truly dry and will remain cloudy and gummy.  Because the Mod Podge is water-soluble and may remain tacky in some climates, it is always advised that you seal any découpaged object with a clear coat of polyurethane or other spray sealant.

Glue Dots:
Glue dots are a great way to stick dimensional objects without the wait for liquid glue.  They are especially good for non-porous objects or anything that won’t stick with regular adhesive or foam tape.  Glue dots generally come one of two ways, on a roll, or on a sheet.  Whatever type you buy be sure not to touch the dots with your hands.  The oils in your skin will interfere with the adhesive and they won’t stick as well.  Instead, touch the object to be glued directly to the dot and gently lift it off the backing.  If this is not possible, then use your scissors or tweezers to lift the dot off the backing.

Foam tape and squares:
Using popped-up embellishments can add dimensional interest to your cards and scrapbook layouts, but sometimes the backing is difficult to peel off.  Several years ago, I learned a simple technique that works every time: use your scissors or a fingernail to press a crease in the backing.  The crease will bend the paper backing, forcing the edges up where you can grab them with your fingers or tweezers.  The backing will still be easy to grasp even after you remove the scissors 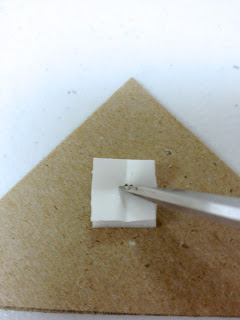 Redline tape (aka tacky tape, pink tape, super tape)
Redline tape can come in very handy when you need to stick something securely, or when sticking paper to non-porous objects.  However, one step many scrappers forget is to burnish the tape to make sure it is stuck well before peeling off the backing.  You can do this by rubbing on the backing with your scissors or a bone folder until the color changes slightly and there are no bubbles.  Once you have stuck the tape well, you can remove the pink backing by inserting your scissors under the backing along the long edge of the tape.  Don’t try to peel it from the end, as this may cause the adhesive to peel up with the backing. 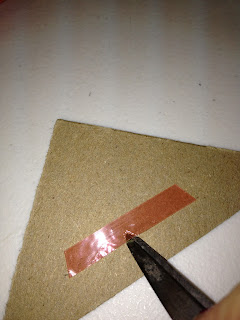 That’s it for the adhesives.  Like all things, there are a lot of different brands and everyone has their favorite.  If I’ve left off one of yours, please let me know!  I’d love to hear all about it!
Update (9/30/2020):  One adhesive that wasn't mentioned here is Scor-Tape, which is very similar to the red line tape mentioned above.  Scor-Tape can also be called Tear Tape because the paper backing on it tears very easily. This feature makes it super easy to stick down a line of tape and tear it off the roll exactly where you need it without scissors or a craft knife. It's also a bit thinner than red line tape so it won't bulk up your albums and projects. This popular tape comes in a variety of sizes. Use it just as you would red line tape.
Some other products you might like:
*As an Amazon Associate, I earn from qualifying purchases
Posted by Crafty Neighbor at 8:00 AM