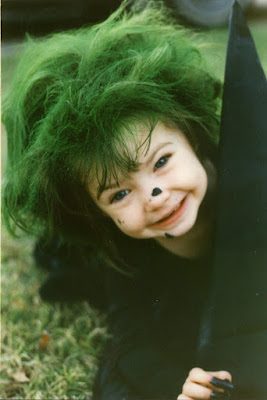 I’ve always loved holidays. Around the Murray house, any holiday is a good excuse to fix up the house, dress up the kids (and me!), and whip up some good food. Halloween is no exception, and I’ve spent a lot of that “dress up” time coming up with some fun costumes for my kids and myself. In fact, it’s been a sort of challenge to see what I can come up with each year. 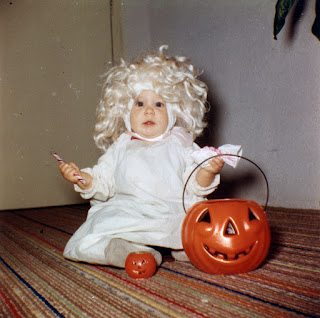 I think it all started when I was a kid. Back then, there weren’t so many ready made costumes…just the plastic masks that had cutouts for your eyes and even tinier holes for your nose and mouth. My mom would often buy us the mask (they didn’t cost that much) and then make our costumes to go with it. The earliest one I remember was (I think) either a Cinderella or Snow White mask, and my mom took an old curtain, some glue, and silver glitter and turned it into a cape.  I was a princess! But I actually have a photo of one that’s even older…me in a white-haired wig.  I wasn't even a year old yet, and I have no idea what I was supposed to be. Later, someone made matching clown costumes for my aunt and me and we just continued the tradition until it was time to make costumes for my own kiddos.

Making your own costumes does NOT have to be hard, and believe it or not, it very rarely even requires any sewing. One of my most famous costumes (or maybe I should say “infamous”) was the zebra outfit I wore to work one year. It was HOURS before anyone figured out who I was, and so I won the prize for best costume. All it took was a zebra stripe Uni-tard, black boots, black gloves, some black and white face paint, and a banana hair clip – all of which I already owned.

My daughter loves homemade costumes as much as I do. When she was a child, I once rolled her hair in curlers, slathered on white face-paint, dressed her in PJs and a robe with house shoes and called her a “Housewife”, complete with rolling pin. She’s also been a princess, a bug, a fairy, a mouse, a witch, Dorothy from the Wizard of Oz, a cheerleader, a clown, a gypsy, a hippie, and a punk rocker (twice). 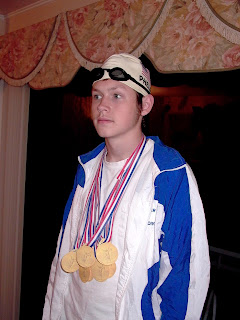 My son has been a bunny, the devil, a pumpkin, a “California Raisin”, the Karate Kid, a soldier (after 9/11), a vampire, a Dickens-esque ghost, and a musketeer, but one of our favorites was the year after the Olympics when he dressed as Michael Phelps, including 7 shiny gold medals.

The internet (and especially sites like Pinterest), has really been a great resource for finding ideas for homemade costumes. It’s a lot of fun, to see how much detail you can add using things you already have. I’m trying to decide what I want to be this year when I open the door for all my neighborhood trick or treaters. How about you? Share your costume ideas in the comments, or start a discussion over in our Crafty Neighbor Facebook discussion group: Crop and Craft Events.

Until then, Happy Hauntings! 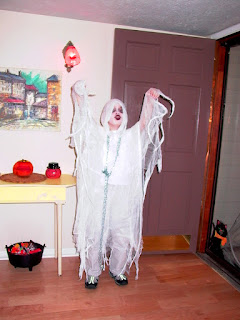 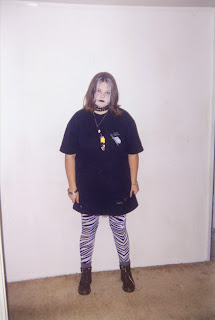 Posted by Crafty Neighbor at 9:00 AM No comments: