For today's post, I thought I would share with you some more samples out of my art journal.  If you read my recent post about intelligent intuition, you may recall that I suffer from a severe lack of intuition at times, and very often get stuck on how to proceed with a project.  So for today, I wanted to share with you the results of that.

This first example is a page where I had a starting point, but I didn’t know how to proceed.  It is still a work in progress, and the next time I sit down with my journal, I plan to apply the four steps referenced in the article.  I started with the background, which was cut from a magazine.  Then I found the quote, but  I’ve been stuck where to go with it from there.  I did add some stamps, but didn’t like the way they turned out. 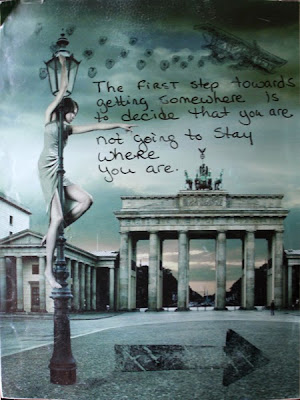 Another page I have struggled with is this one on the theme of “some things we share”.  I really got stumped on this topic because although I share a lot of traits with several people, I had a hard time reconciling those with my power word. (Still haven’t guessed my power word?  My offer still stands!)  After several days of staring at the blank page and putting it off to work on something else, I finally settled on my physical attributes that make me unhappy.  I think we all have a lot of self-hate when it comes to our bodies.  We are always comparing ourselves to other people and somehow falling short.  So I picked out some “nice” physical features that I wished were my own.  I cut them from magazines and I used several different pictures so that none of the parts came from the same source.  They were all pretty features when they were part of the original picture, but when you put them together, they really look pretty hideous.  The point is that this self-loathing is something that we all feel, and while I may hate the way my nose looks on my face, my nose might be quite pretty on another’s face and there may be someone out there who looks at my nose and wishes it were theirs in much the same way I wish mine were different.  I really have not love for this page.  I don’t think it’s finished.  I need to do more, but I’m sure that will come with time. 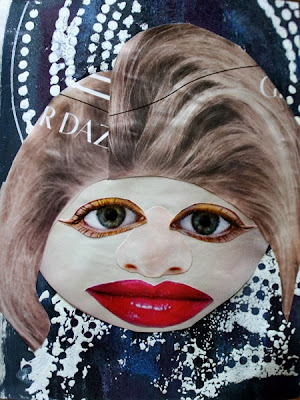 This last example is one I am stuck on now.  The prompt was “Once in a Lifetime”.  I have thought and thought and thought about this one and am completely stumped.  The only thing I can think of is the song by the “Talking Heads” of the same name.  In the early ‘90’s we played this song in a fun little cover band back in Lubbock.  That’s it.  I did take the scraps I cut off another page and glue them down, thinking I might gesso over it for some texture, but that’s it. 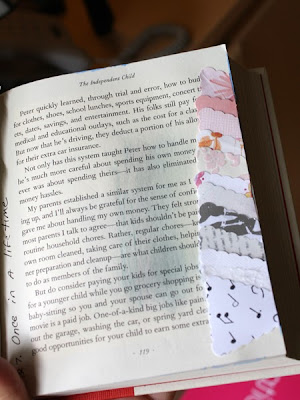 One of the points I want to make by posting these three examples is that creativity isn’t perfect.  You aren’t going to love every project.  You’re not even going to finish every project.  But you do have to at least start.  If you get stuck, move on.  Or if you are insistent on completing what you start, then use some of the tools and tips that others recommend.  Try the four steps to build your intuition.  Or just start slapping things down.  Either way, it is still creative, you are still creating, and who knows, you might just come up with something that you truly love.  I know I did back on Day 79 of my 365 journey.  You can see it here.

I haven’t done much talking about my 365 project lately.  As I’ve probably mentioned, I got stuck on one of my daily art journal entries and then found myself getting behind.  I haven’t caught up yet.  I’m not ready to give up, though.  I’m still finding ways to be creative on a daily basis, even if it’s not my art journal, and I am still working on the art journal a little at a time.  On the weekends, I sometimes have a little more time to be creative, so I try to get a few pages done at a time.  At this rate, I might catch up by the end of the year.

Besides, the point of the 365 wasn’t to finish 365 page layouts or art journal entries.  The objective is to do something creative every day.  To make yourself create, even when you don’t feel creative.  To set aside that time for yourself to do what you really love and to give yourself the freedom to explore it in different ways.  By setting aside the time to create every day you set up a habit of being creative and you learn to work around obstacles and distractions.

I started thinking about the 365 project today while I was reading the Scrappersaurus blog written by Deidra Famularo, who used to own scrapbooking stores in the New Orleans area.  Back in March 2012, “Dee” said, “Those customers who knew me when I had the storefronts open can tell you what I always preached to them, ‘An appointment with the doctor is considered important enough to schedule time off from work or time away from everything else. However, if you don't consider yourself important enough to schedule some time off from your usual, hectic routine, it more than likely will turn into a doctor's appointment, forcing you to take time off.’"

Dee is absolutely correct and she’s not alone.  Kris Carr, on her Crazy, Sexy Wellness Revolution website posted an article by Casey Lorraine Thomas titled, “5 Steps to Stop Overeating.”  In the article, Thomas, a certified detox, health and life coach, states that you should “find a way to build in some time every day to do something you love, that gives you a creative outlet for self-expression, and that allows you to be exactly who you are or takes you a step closer to that,” and that there are no excuses about having no time or energy to create because “you only need five minutes to start doing this. If you have more, that’s great. If you are honoring your needs and desires by acting on them every day, you will be far less likely to look for the answer in cake. Self- satisfaction and happiness comes with nourishing your whole being – physically, mentally, emotionally and spiritually – consistently. This is your way out.”

I couldn’t agree more.  So the next time you are craving a cupcake, why not paint one instead?  Or scrapbook one.  Or crochet one.  Or….  Just spending 5 minutes of every day doing something creative will completely change your outlook on life.  And at the end of 365 day, you will have been creative at least 30 hours more than you would have if you hadn’t even tried.  Thirty hours is a lot of creativity.  I bet you’ll find that you’re even more creative than that.  And if that ain’t crazy sexy, I don’t know what is!

Today, I leave you with a quote attributed to Buddha.  I think it is particularly apropos.  Our creativity is inside us, we just need to use it to let it out! 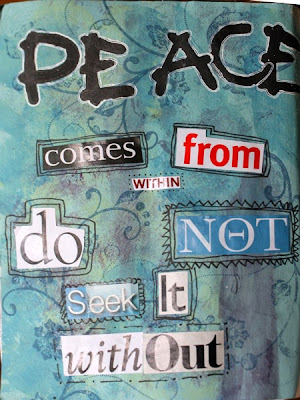 Once, while sitting in the waiting room of a doctor’s office, I picked up one of those freebie magazines that are often distributed by such places.  This one in particular had an article that caught my eye because it was talking about developing and following our intuition.  The magazine was Natural Awakenings from September of 2011, and the article was “A Path to True Insight:  Write from the Heart.”  According to the author, Nancy Rosanoff, “When we feel good and right about a decision, we often attribute it to having followed our intuition.”  But what happens when we have no intuition?

I am terrible about making decisions.  Any decision.  Even something as mundane as what to wear or what to eat for lunch that day.  I am often either overwhelmed by too many decisions, or else I can’t think of a single one.  So you can imagine how hard it is sometimes for me to start, much less complete a scrapbook page.  Especially one that has special significance, like the bridal page I did for my anniversary.  I have to get completely in my creative zone to get anything done, and even then I pull out some supplies and I stare at them.  I start on it, but then I second-guess myself and do something else.  I pull out all my stamps because I can’t decide which one I want to use. I can drag the simplest project out for hours due to my indecision.

There are some schools of thought that suggest people like me should just go with the first thing that comes to mind.  That might work for some, but not for me, because just as sure as I glue down that die-cut title, I will think up some better way to do it.  Then it is either too late to fix it, or it will require hours of work to change it.  I like the approach of the article, which encouraged readers to use writing to sort out the dilemma.

In the article, Rosanoff talks about developing your intuition using a 4-step writing exercise that helps to move our attention away from the details of a problem and into an awareness of what is truly needed.  Her steps are:

Rosanoff’s theory is that by allowing the ideas to flow through you and onto the page, it will help eliminate any confusion you might feel and will allow you to make choices based on harmony, clarity, and peace.

When I have a hard time working on a project due to my indecision, my wonderful hobby becomes a stressful task that I dread.  And if it is so stressful, why should I continue?  Applying Rosanoff’s steps might help me turn my crafting time from stressful to blissful.  What do you think? 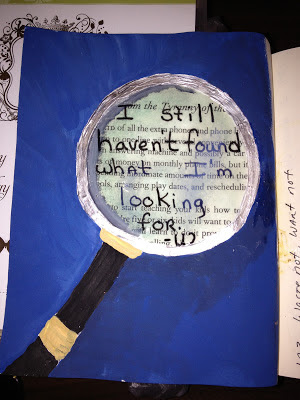 Today’s 365 project is an art journal entry that I did a while back, but it comes much later than originally expected due to the simple fact that I got stuck on one of my entries.  There’s that indecision rearing its ugly head again.  I’m still searching for that inspiration.  I’m hoping these four little steps will help improve it!