A Store on Every Corner!

How many times have you complained that there are no scrapbooking stores left in the DFW area? Come on, ‘fess up…. I’ll be the first to admit that I grouse about it all the time. But the fact of the matter is, that’s just not true! Recently, Pam and I were taking a mental count of the local stores so we could distribute flyers for our up coming Pam’s Pals Benefit Crop. I was thinking there were only 4 or 5 stores left in the whole Metroplex, but when I started ticking them off on my fingers, I realized there were more. Sure enough, when I actually sat down and made a list, there were a LOT more. And then, after doing a little digging on the internet and browsing one GREAT online resource, I came up with a list of more than 20!
I can hear all of you saying “HUH?” from here. But sure enough, it’s true. If you count the stores from Whitesboro to Corsicana, from Greenville to Mineral Wells, there are more than 20 stores that sell paper and scrapbooking supplies and they’re all still open for business. And NO, I am NOT counting all the Walmarts, JoAnn’s, Michael’s and Hobby Lobbies! Granted, Ten Seconds Studios is not really a retail outlet and they don’t have a storefront, per se, but they do sell scrapbooking supplies and they do have a studio in North Richland Hills. And no, Paper Source may not be a strictly scrapbooking store, but paper is paper, right? I count card making supplies among some of my very favorite things! Most of the stores in my list really are scrapbook stores, though, and while I haven’t had the opportunity to visit all of them, you can bet your boots I will be doing just that VERY SOON!
So where did I come up with this magical list of stores? Well, some of it came from my own knowledge, obviously. I spend a lot of time looking around for new places to shop and crop. But I did get a lot of help from a great online scrapbooking resource called Texas ScrapMania. The site boasts extensive public directory listings of scrapbooking stores, clubs and events for the entire state of Texas and even some parts of southern Oklahoma on occasion. Listing your store, event, or service is free, and listings are sorted by geographical location. Texas ScrapMania was previously featured in Memory Makers Magazine and was profiled in the Austin American-Statesman. If you haven’t checked it out yet, you really need to do so! I never knew there was so much out there!
And now we are at the part you been so anxiously waiting for -- the list of stores. Drum roll, please……..

View Scrapbooking and Craft Supplies.kmz in a larger map

See! More than 20! I hope you’re as excited about all of them as I am! I can’t wait to go check out a few. Maybe I’ll see you there!
Cindy
Crafty Neighbor
Posted by Cindy at 11:55 PM 9 comments:

Stickles, Cricut and Walmart -- Oh My!

I can’t believe it’s already a new year!  This past year went by so fast for me, and even though we’ve been really busy, I don’t always feel like I’ve gotten a lot done.  Either way, it’s good to have a fresh start and my vow to myself -- (let’s not call it a resolution because then I might just break it!)…where was I?  Oh yeah, my vow to myself is to let go of things that waste my time.  Efficiency is the key, and so is organization.  I’ve been working on organizing my craft supplies for quite some time.  It’s always a work in progress, but hopefully some day I will hit on the perfect option.
Lately I’ve been using some snap-type food containers that come in a wide variety of sizes.  It works well for most of my stuff, but some supplies have been moved from one box to another so many times that I’m not even sure where they are any more!  For instance, just about the time that I find the perfect container for my collection of Stickles, Ranger comes out with a few more colors that I absolutely must have, and there I am again, looking for a new container! 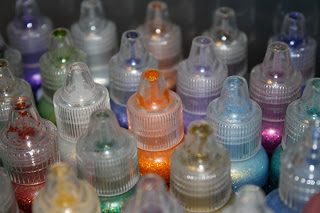 This week is no exception.  Christen discovered that Ranger is releasing nine new Stickles colors.  Luckily for me, my current Stickles container has some extra room in it (I thought I’d try to stay ahead of the game this time!), so all I need to do is move my tiny bottles of flocking to a new home and then I’ll have plenty of room to add all the new colors, especially this one: 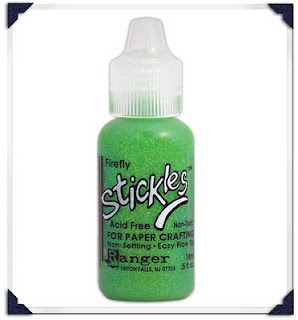 One of the new colors does not yet have a name.  Ranger is running a contest to pick the name for the new Stickles.  The winner gets new Stickles, of course!  If you are interested, please go to http://blog.rangerink.com/blog/2011/01/nine-new-stickles-colors-and-a-contest.html and place your vote.
I could easily be just as excited about all the new Cricut cartridges, too, if it wasn’t for the fact that I am so frustrated with the selection.  Have you noticed that ProvoCraft hasn’t released many new letter fonts in quite some time?  It seems they have shifted their focus away from lettering and fonts and onto cutesy artwork, graphic designs and, of course, cake decorations.  I don’t know about you, but the whole reason I wanted a Cricut was to cut out fonts -- letters, words, titles, etc.  The zoo animals and robots and fruit and flowers are cute and all, but what I really need is alphabets and numbers!
While I’m grousing about the woefully low number of actual fonts, let me tell you about my recent attempt to buy a Cricut Lite font at Walmart.  I’m not a frequent Walmart shopper.  I used to go there all the time, but the two Walmart stores in my immediate area are filthy, over-crowed, under-staffed, and over-priced on a lot of the items I buy.  Most people automatically assume that they have the lowest price, but this is not necessarily so – they only guarantee that they will match the lowest price.  I have frequently found that many of their prices are actually higher than at other stores on many of the items I buy regularly.  On top of that, after a major store remodel a year or two ago, I found that they no longer carry many of the items I would go in there to buy.  The craft section was cut down to less than a ¼ it’s original size, with no fabric section at all, and the scrapbooking section, which used to take up two full rows, is now relegated to half a row at the front of the store next to the wedding supplies and birthday cards.  So for me, it’s just not worth it to go in there.  Yes, I could get stuff at a low price if I want to sit there and argue with the cashier over the price of every single item, but chances are, they won’t have what I need anyway, so why bother?
There is, however, one thing that would make me go shopping in a Walmart store, and that’s a Walmart-exclusive Cricut Lite cartridge.  I had decided a couple of weeks ago that the Handy Man cartridge was exactly what I needed to finish my son’s Eagle Scout project scrapbook.  All my layouts were done except for some journaling and embellishments.  So when I saw this font, I knew I had to have it.  Unfortunately, it’s a Cricut Lite cartridge, so that means a trip to Walmart.
I planned my trip out carefully and waited until I needed some additional items to make my trip worthwhile.  Unfortunately, when I got there, the only thing the store had that was on my list was a bell pepper and some cheese!  They were either out of, or didn’t carry, everything else!  I went first to the scrapbook section, thinking I would find a rack with a wide assortment of these Walmart-only Cricut cartridges.  Nope.  They did have four of the new Cricut Expressions in the cute new colors.  They also had one of the older Cricut cartridges that was several years old.  It was still priced at $64.  I think I can buy that same cartridge at CricutMachine.com for $14.99.
Thinking that these new cartridges must be shelved on a big display somewhere else in the store, I gave my BFF Stephanie a quick call to see if she’d seen them.  She suggested I look back in the craft section because she’d seen them there a few times.  They did have two additional cartridges, hanging right next to the sheets of felt and bags of puffballs (or something completely incongruous like that), but again, they were older cartridges, priced far above what they were worth, and there wasn’t a single Cricut Lite cartridge to be found.  So I bought my cheese and left.
Not wanting to drive all over town hoping that another Walmart might have the cartridge, I decided to go online to Walmart.com and use the site-to-store shipping option.  This would save me a few bucks, and hopefully I could get it here a little quicker by volunteering to come in and pick it up rather than wait for it to be shipped to my house.  Or so you would think.  In actuality, the site-to-store option was actually going to take longer than a UPS delivery to my house, but these so-called “Lite” cartridges really aren’t all that cheap, and I needed to be frugal after the holidays, so I chose the site-to-store method anyway.  It wasn’t until after I had gone through the entire checkout process that a message came up on the website and notified me that site-to-store wasn’t available.  Apparently, not one of the 30 Walmart stores in a 50 mile radius had this item available for site-to-store delivery.
Needless to say, I wound up having the cartridge shipped by UPS and it still hasn’t arrived.  I think next time I’ll just order it from Amazon.com.  They carry the Cricut Lite cartridges, too, and though it may cost a little more, it will be worth it to avoid the hassle of a company I’d rather avoid.  In the mean time, I guess I’ll just have to be satisfied looking at all the pretty new Stickles!
Posted by Crafty Neighbor at 10:32 PM No comments: