I have to laugh, because as tempting as it was to do another maroon A&M page, I didn't want to do that to you.  Instead, I decided to go a completely different direction and work on a page from my own childhood.  I have very few mementos from my childhood (most were lost in a fire), and only a few brief memories of that time in my life, so I thought it would be best to keep it to one page.  And since I went to a private school for kindergarten, there were no yearbook photos.  But what I did have were some studio portraits from about the same time, a newspaper clipping and two report cards that were stuck in my baby book.  Add some washi tape and assorted rhinestone stars, and voila! 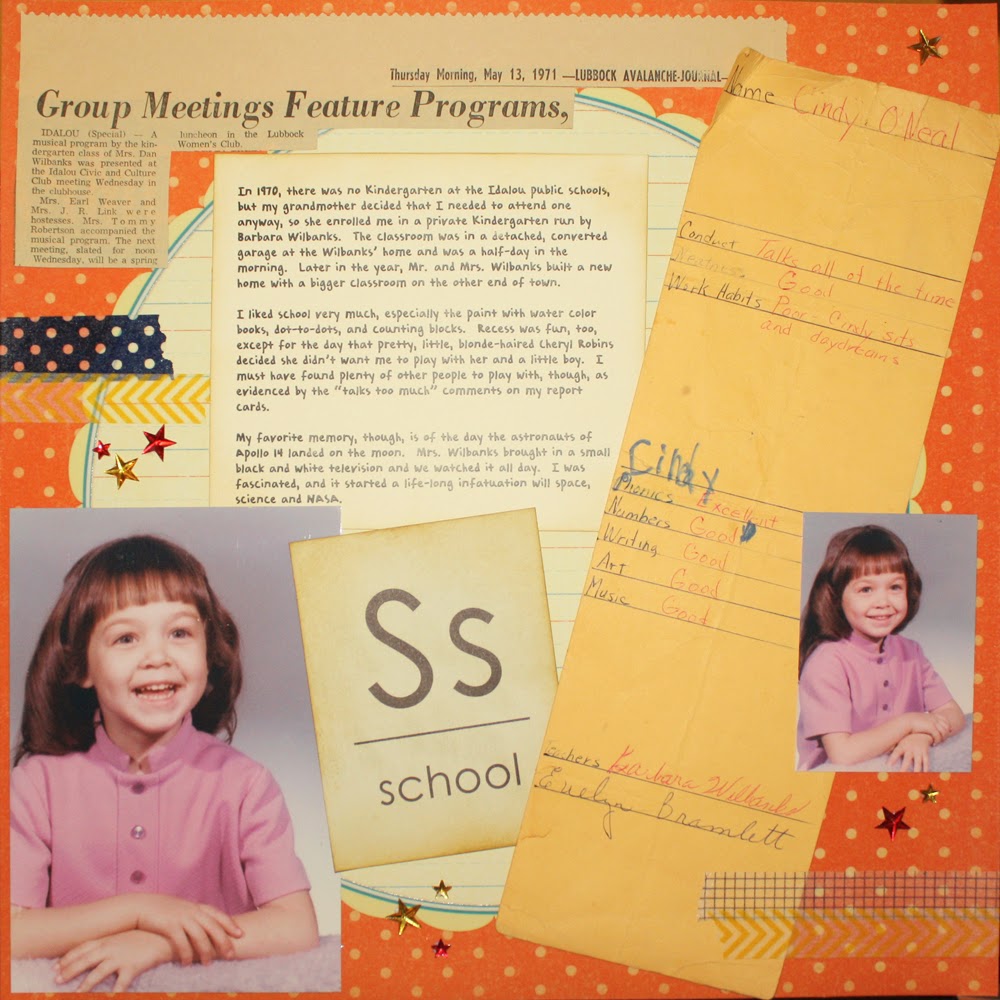 Day 8 – Soundtrack of Your Life 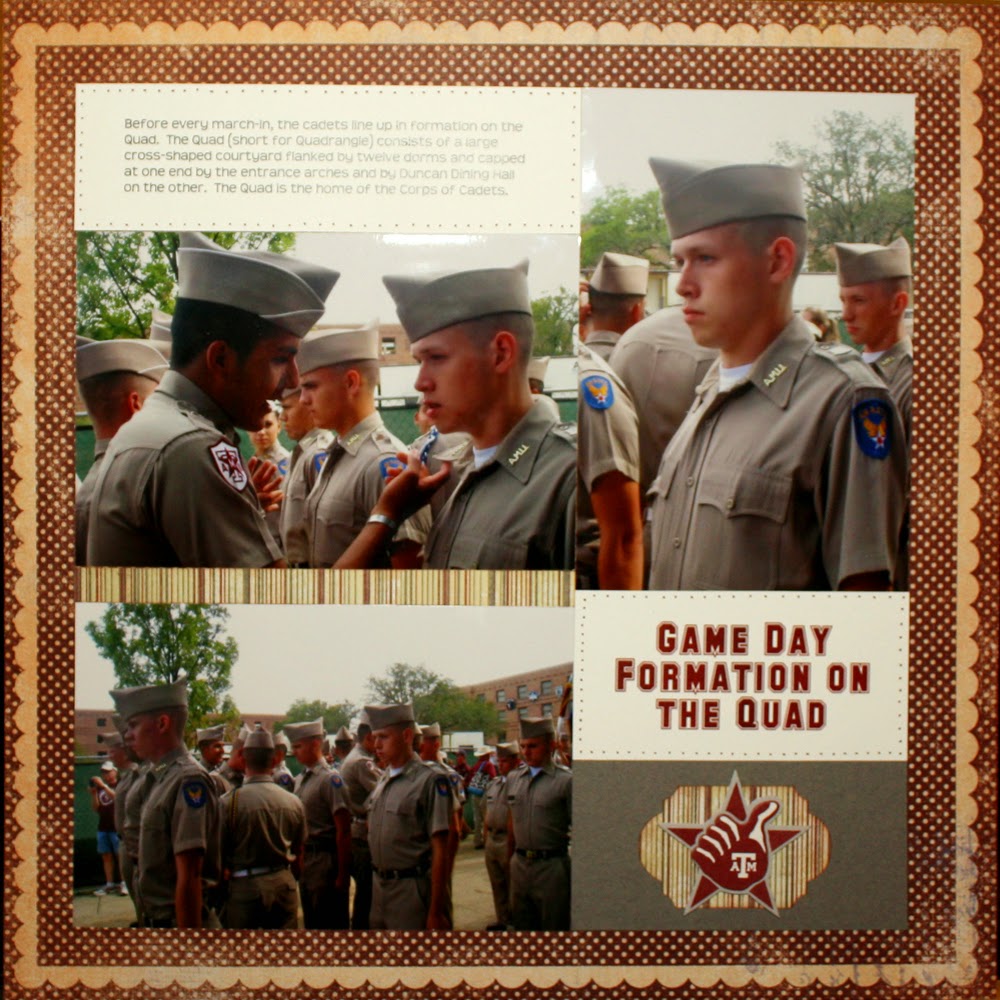 I’m still stuck in the project box for this prompt. It’s hard to resist the pull of doing a layout without having to pick out pictures, match paper, or figure out what’s next.  I have all these project boxes right there in front of me with ready-to-crop pictures, matched papers, embellishments, and sometimes even ready-made journaling.  Plus, I’m doubly motivated to get some of these projects done because they’ve been hanging around for a while and I’m already getting tired of them!

I did at least try to stay on theme for this page, as I was going to do a page featuring the lyrics to the A&M fight song or maybe one the marching cadences the cadets use, but I had multiple large pictures to fit on only one page, so I decided I didn’t have room.  What I wound up with was this simple, blocked layout.
Posted by Crafty Neighbor at 8:00 AM No comments:

Day 7 – The Most Wonderful Time of the Year

Day 7’s challenge from Lain was to make a page with the theme “The Most Wonderful Time of the Year”, but she urged us to stay away from the Christmas pages that the title insinuates.  I thought long and hard about that because really, Christmas is the most wonderful time of the year for me, but then I went back to my old standby-by project box and pulled out these photos from a Texas A&M football game.

Football season is an intensely unique experience in College Station, and Texas A&M Aggies are some of the most fanatical fans in the nation.  Being a Cadet adds a whole ‘nother level of dedication.  It also means that I have pictures from just about every home football game (thanks again to all those Facebook buddies!).  So to give a little perspective on this experience, and to reserve some journaling for other pages, I decided to focus on just one or two aspects of the experience per layout, rather than trying to be totally inclusive of the whole experience on one page.  I had some great panoramic shots of the grandstands from my son’s first game, so for this page, I decided to focus on the 12th man tradition.
A few days after his first football game, the school posted high-def panoramic photos of the student section of the stadium.  Of course, I immediately started taking screen shots at different levels of magnification, right down to a photo where I spotted my own son in the crowd.

Because the pictures and the background paper were so busy, and I wanted to keep it to one page, I decided to limit my embellishments to a couple of packaged 3D stickers and nothing else.  I can’t decide, though…should I put an arrow or other marker to show Steven in the close-up photo, nor not?
Posted by Crafty Neighbor at 8:00 AM No comments:

Okay, I’ll admit it; I went completely off-topic on this layout.  When I first saw this prompt, I thought about a multitude of pages I could do about songs that I sang wrong for years or the hours we spent hitting "rewind" trying to figure out the lyrics to some of the songs we performed in our rock band.  I even thought about the very strange lyrics to Texas A&M’s Aggie War Hymn (fight song), but in the end it was really just too much to think about, so I did something quick and easy instead -- a cop-out, I know. 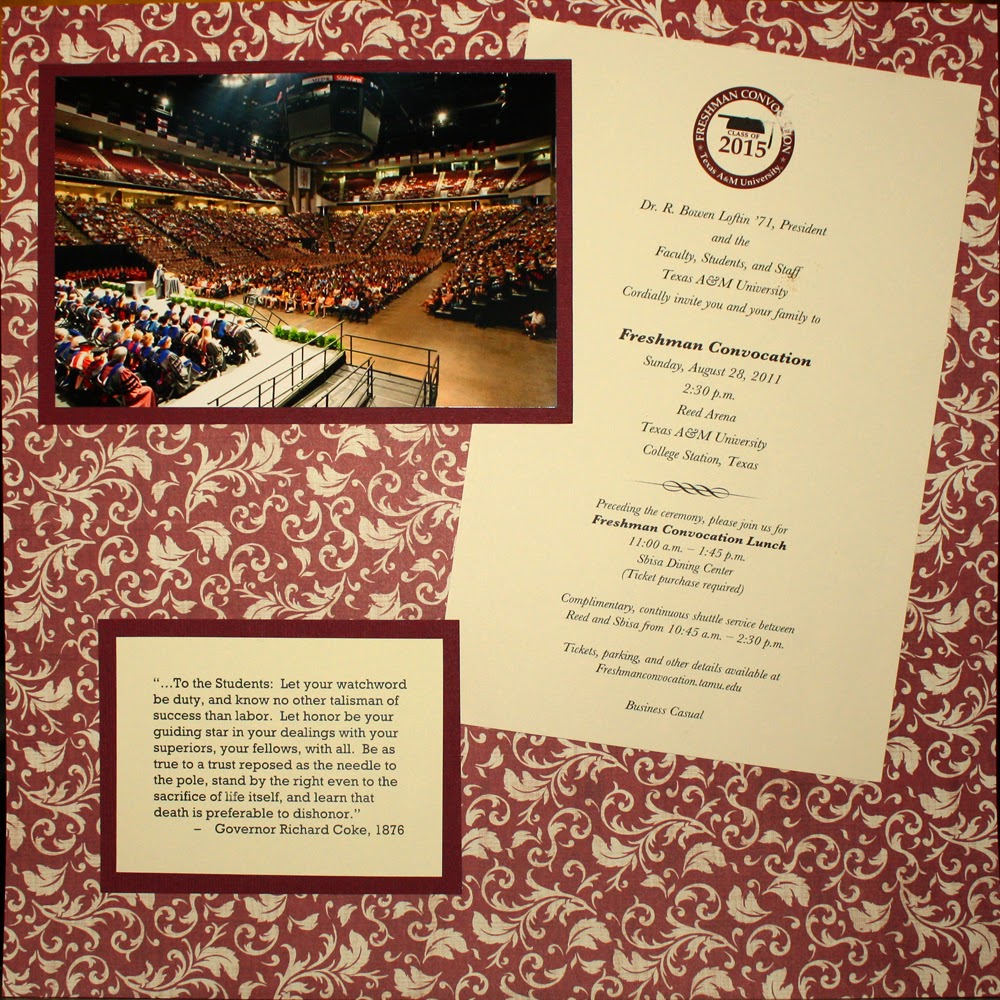 Today I used another piece of paper I found at the local craft store, added the program from the event, an interesting quote from a historical speech, and a photo I found online.  I kept it simple and to the point.  No muss; no fuss.  Not every page has to be a masterpiece.  This layout will serve the exact purpose it was intended to serve, to remind my son of his Freshman Convocation.  Maybe it was memorable, maybe it wasn’t, but since it was his memory, and his alone, it really doesn’t need anything more than what I’ve already put on the page.  If, when he sees it, it invokes some memory that changed the course of his life, we can make another page about that.

The photo I used on this page (and other pages in my son’s college scrapbook) brings me to another point.  We don’t always have the perfect picture.  If, like my son, your children go off to college and never take a single picture, then you have to rely on their stories (which, yes, it is perfectly okay to wheedle out of them, even if they begin to hate you for it), and if you’re lucky, the photos taken by their friends.  Welcome to the magic of Facebook.  If it weren’t for social media, I would have no pictures of my son’s college life at all.  He is totally a non-photo-taker, although he does enjoy looking at the results of my scrapbooking from time to time.  Luckily, many of his friends post pictures online, as do the campus organizations to which he belongs.  I make it a habit of “liking” every organization my son joins, and following several of his friends and groups on Facebook.  Then, whenever they post new pictures, I can scour through them to see if there are photos of my son or his buddies that I can use.  It really is the next best thing to being there!
Posted by Crafty Neighbor at 8:00 AM No comments:

Wow!  There are some days when the prompt is so LOADed that I don’t even know where to begin.  When I think of this prompt, I think about moving out on my own for the first time with my new husband.  Then I think about sending my kids off to college to begin their own adult lives.  I even think about how turning 40 (and coming soon, 50) has changed my perspective on being authentic to myself and how my real life is just beginning.  Too much to think about...so for this page, I opted to dip back into the college project box.  This time, I did a page about visiting my son at college and rescuing him from dorm life.  Is it a “real life starts at ___” page?  Not really, but then, which is real and which is not?  Moving away to college and being on your own, the dorm life of a cadet, or stepping off campus with Mom to eat some good food and feel normal again? 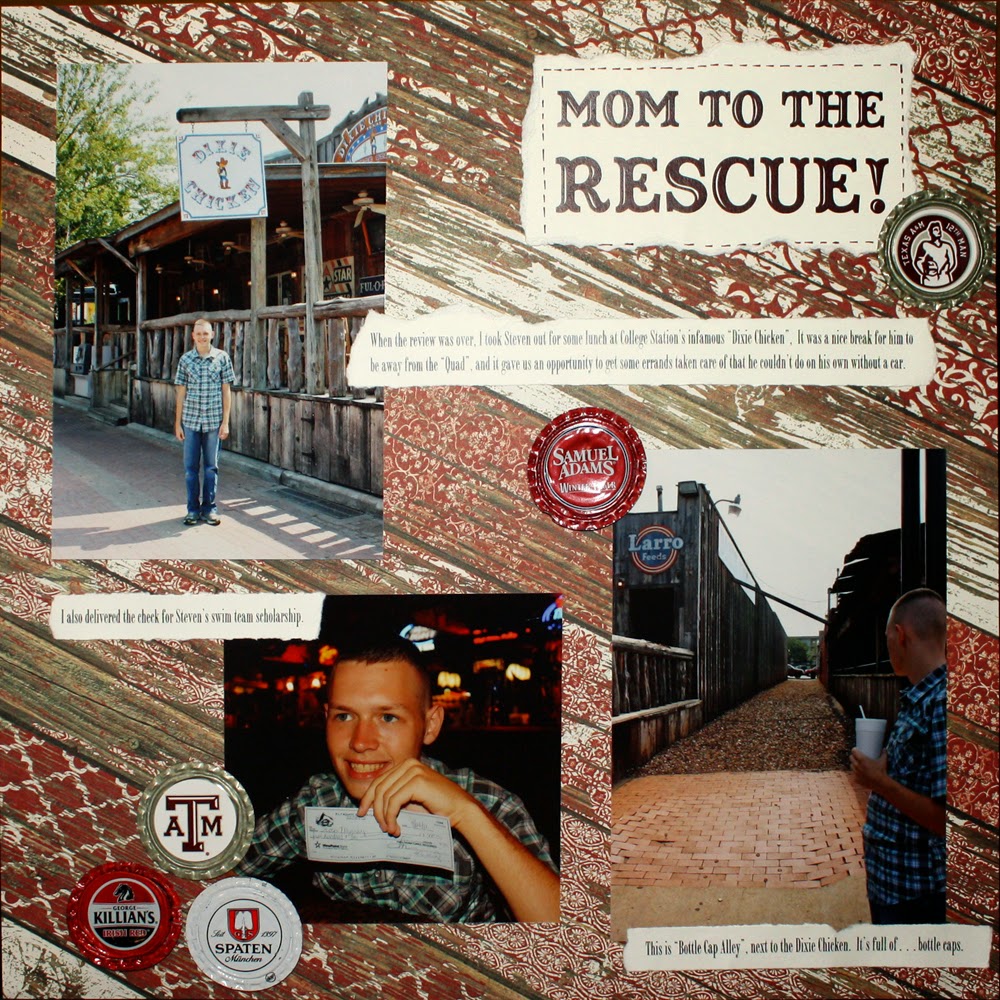 I think I found this paper at Hobby Lobby, or maybe it was Michaels – I’m not really sure.  One of the challenges I’ve had working on Steven’s college album is finding paper that works.  His school colors are maroon and white, and when I first started on this album, I used a lot of packaged school-themed paper licensed by the university.  Boy did that get old fast.  But I wanted to keep everything in that color theme as much as possible, so I started hunting for other kinds of maroon paper.  Believe me when I say there are days that I wonder if it is all worth it.  Maroon has to be the hardest color of paper to find anywhere.  It just doesn’t exist!  There is crimson, and there is purplish wine, but hardly anyone has any paper that is maroon.  So whenever I find any, I buy it all up!   This paper is closer to crimson, but since I didn’t use a lot of maroon embellishments or cardstock, it works just fine.  Once it’s in the album, it fits perfectly well with the theme.

Some tips for finding paper that might work in your themed albums: