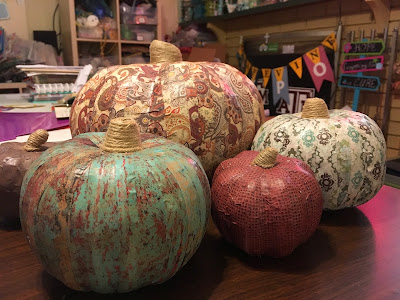 I know it’s a little late for a new Thanksgiving/Fall project, but this one was so quick and so cute, I just had to share.  I’ll admit that I did not come up with this project on my own.  I was scrolling through Instagram one day and Hobby Lobby had posted an ad with these cute papier-mâché pumpkins and I just had to give it a try!

I found the paper I wanted and two sizes of papier-mâché pumpkins at Hobby Lobby, but for balance, I wanted a size in-between as well.

That’s when I decided it didn’t really have to be a papier-mâché pumpkin; this technique would work on plastic or other materials as well.  So I found a couple of Styrofoam pumpkins at Dollar Tree in the perfect size.  I also like that all three sizes are slightly different shapes, so it gives it a bit of interest. 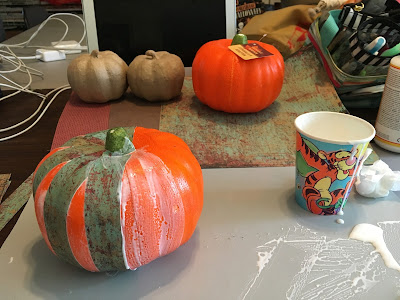 The first step in creating these beauties is to cut your paper into long strips.  I started with 1 inch, but quickly found that was a little too wide for the medium pumpkin, so as I worked on it, I cut some of the strips in half. 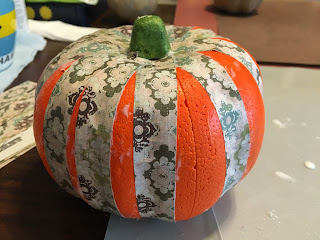 On the second pumpkin, I went to ¾” strips.  The 1” strips worked just fine for the large pumpkin.

Why does it make a difference? The pumpkin curves—not only up and down, but side to side – and the paper is flat.  If the paper is too wide it will pucker and wrinkle as you lay it down.  The thinner the strips, the less it has to curve, and therefore, the less it will wrinkle. 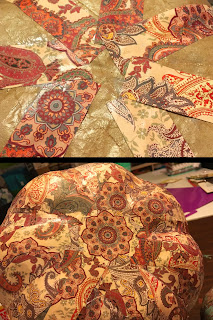 The length of the strips will vary depending on the size of the pumpkin.  I found that my medium pumpkin was about 8” from the stem down to the middle of the underside, including a bit of overlap.  I cut all my pieces into 8” strips and was left with an equal number of 4” strips.  The easiest way to decide what length you need is to take one of your strips and hold it next to the stem while you wrap it down the side and across the bottom.  Let it cross over the center and then fold it back the direction it came.  That’s where you’ll cut it.  They don’t have to be exact, either, because they are all going to overlap each other on the bottom.  So as long as it covers the bottom center of the pumpkin, you should be good.


Unfortunately, the 12" strips weren't long enough to go all the way to the middle of the large pumpkin.  So when I finished wrapping all the strips around the pumpkin, I covered the spot with a scalloped circle punched from the same paper. 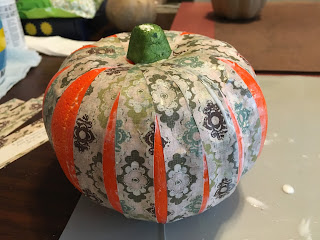 I used Mod-Podge because it’s my go-to collage medium, but you can probably use other glues.  I painted a wide strip of glue onto the pumpkin and also on the back of the strip, that way you know you have good coverage. Start at the stem and wrap the strip down the pumpkin to end at the middle of the bottom.  I worked on the “valleys” first, because it’s easier to cover the curved parts if you don’t have to worry about getting down into the creases. 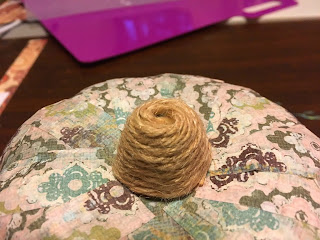 Once I covered the body of the pumpkin, I let it dry overnight and then covered the stem with hemp.  I covered the entire stem with redline tape and then started winding the hemp around.  Start at the top of the stem and stick the twine down to the middle.  Wrap it tightly around the stem, leaving no gaps.  When you get to the bottom of the stem, find a good spot to cut it and tack it down so that it’s tucked up close to the base of the stem.

I also gave my pumpkins a spray of polyurethane to finish them off and protect the glue from getting sticky in humid weather.  You can add to the pumpkins by attaching silk or paper leaves, or even bling.

And here is another view of the finished project. 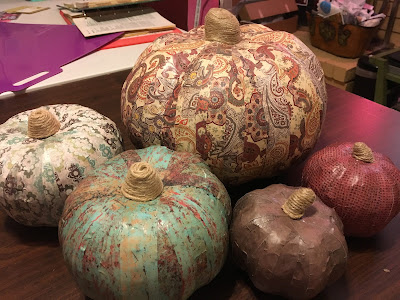 I hope you enjoyed my fun little project – I sure had fun making it!

Until next time, go do something crafty!

Cindy
Posted by Crafty Neighbor at 9:00 AM No comments: